€112 is the average household spend on home energy per month

49% of people unaware that they already pay carbon tax.

The Irish Offshore Operators’ Association (IOOA) has published the first ‘Offshore Energy Index’ to measure levels of awareness about energy use, conservation and supply. The association, which represents companies with licences to explore and produce gas and oil off the Irish coast, says the new regular index is aimed at informing a debate about meeting future needs while at the same time meeting our international commitments on climate action.

The initial index results will be used as a baseline to measure changes in behaviour and habits towards energy use and awareness into the future.

The survey was conducted by iReach Insights on behalf of IOOA to study attitudes and behaviours of adults in Ireland in relation to Energy Consumption and Supply. The research was conducted in Ireland on a nationally representative basis by Age, Gender, Social Class and Region received over 1,000 responses. Fieldwork was undertaken between 19th September and 27th September using the iReach Consumer Decisions Omnibus. This delivered a high-level statistical accuracy and provides a confidence level of + or – 2.5% at a 95% confidence interval.

Commenting on the publication of the Offshore Energy Index, Mandy Johnston, CEO of the Irish Offshore Operators’ Association said: “Our members are committed to energy transition and energy security for Ireland. The launch of the Offshore Energy Index will allow us to track levels of awareness about the challenges we face as a country. It will help inform a debate which is taking place at kitchen tables across the country, as well as on the airwaves and in politics. The findings will also inform people on the role each of us must personally play to bring about real change to conserve energy.”

Highlights from the first ‘Offshore Energy Index’ undertaken by iReach Insights on behalf of the Irish Offshore Operators’ Association include:

The average household spend on home energy is €112 a month, with a further €113 on fuel for transport. The Index indicates an increase in the number of cars from 2.1m to 2.3m since the last CSO figures were published on ownership in 2017.

Surprisingly given the level of political and media debate in the run into Budget 2020 almost half of respondents (49%) did not know that they currently pay carbon tax which raised a total of €431m last year according to Government finances.

The Index indicates that there are 6.2m unused or replaced smart phones and devices lying idle in people’s homes which have not been recycled. It is estimated that 85% of energy used by a device is in production so each abandon phone represents energy waste. 36% of adults have one (15%) or two (21%) unused devices. The total number of abandoned devices is almost equal to the number of smart phones and tablets in regular use at 6.4m. 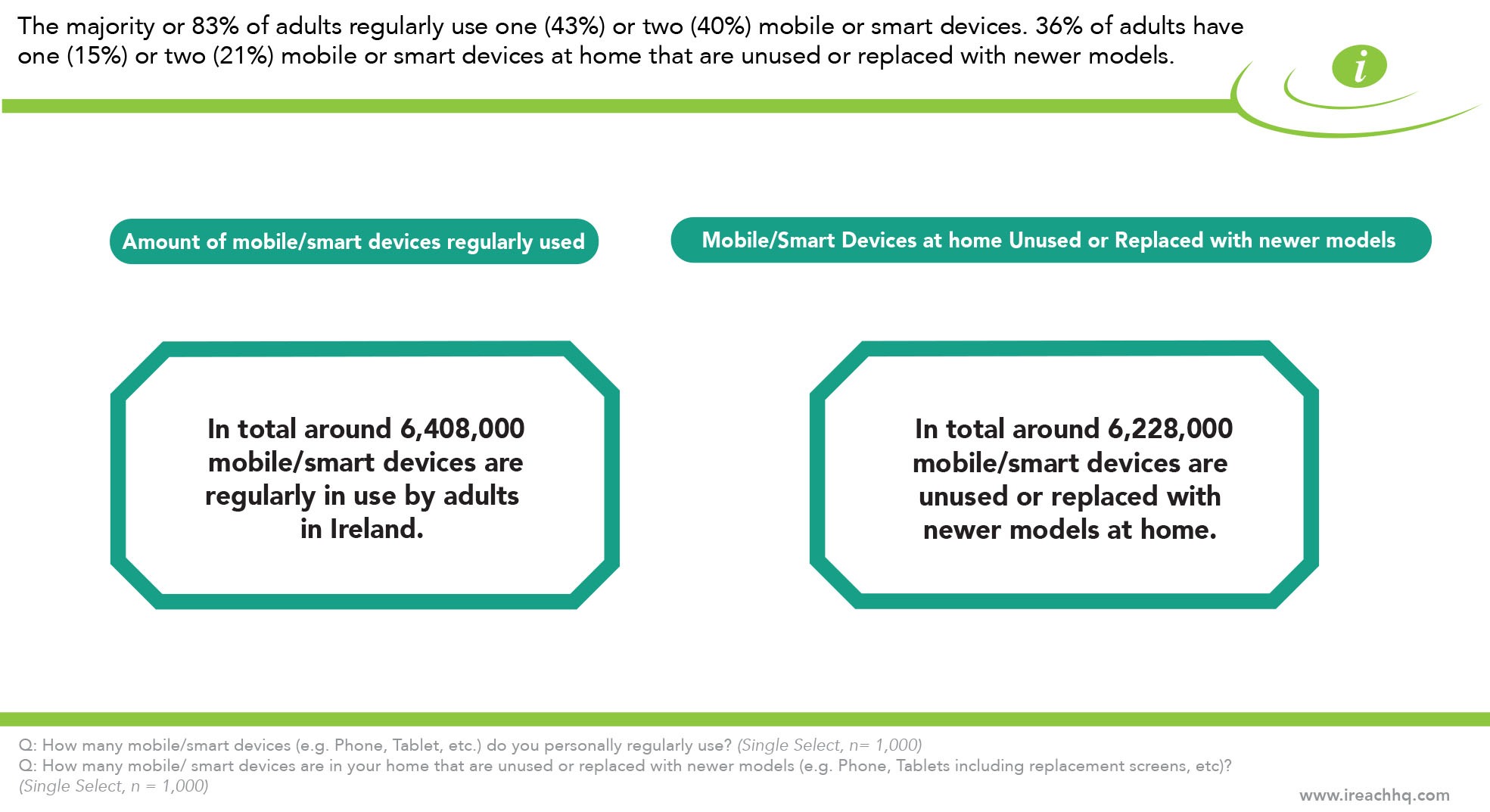 Responding to the household findings Mandy Johnston, Chief Executive Officer of the association which represents companies searching for gas and oil offshore said:

“A generation which grew up learning to turn off the immersion is continuing to show leadership on energy conservation. The steps they are taking not only reduce bills but ensure that our precious energy resources can last longer. However, with one in four younger adults still not saving there is a lot of work to do to change personal habits and attitudes.

Failure to repurpose or recycle mobile and smart devices which have been upgraded or replaced is something which requires immediate action. Each of these represents a waste of energy.”

Current global events, including Brexit, are increasing worries about the price and supply of energy. Three out of four adults say they are either concerned (46%) or very concerned (30%). Nine of out ten (90%) says Ireland should try to secure its own energy, a finding which is consistent across genders and different age groups. 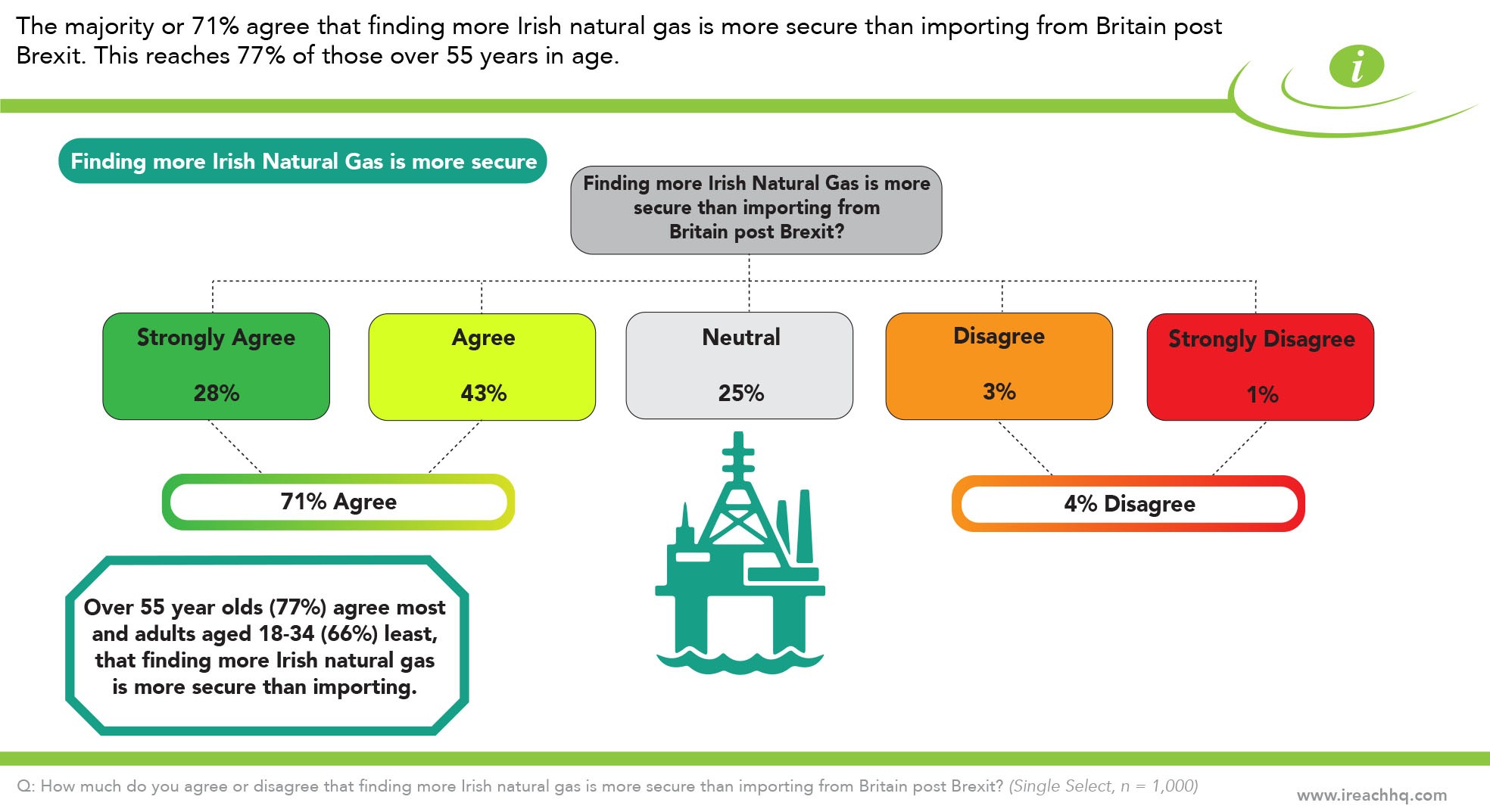 “There is a general lack of awareness about where Ireland sources its power. With 57% of adults unaware that Ireland gets 40% of its natural gas from the Kinsale Head and Corrib fields. However global political instability, tensions in the Middle East and Brexit have made people worried about price and supplies. It is important all stakeholders work together to address these concerns and provide energy security.”